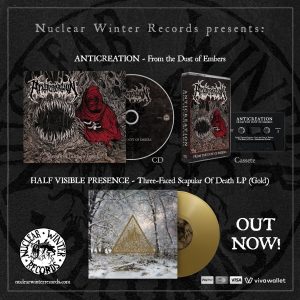 OUT NOW!!!ANTICREATION – ‘From the Dust of Embers’ CD Digipack / TapeCD Digipack comes with bonus trackGreek black/death metal legion Anticreation emerge from the abysses of hell with their colossal debut album “From the Dust of Embers”, a thirty-four minute aural declaration of war toward the insignificance of all terrain things. Anticreation is a vessel unto fusing Necro’s and Noctus’ long running expertise in black metal and the duo’s interest and fascination in the bleakest and most otherworldly forms of dark death metal, namely that one conceived in various waves by bastions of the genre like Immolation, Portal, Pseudogod and Teitanblood, resulting in their debut offering “From the Dust of Embers”, an imposing dark death metal beast levitating with an immense aura of complete ruin and inevitability.HALF VISIBLE PRESENCE – ‘Three-faced Scapular Of Death’ MLPLimited to 250 copies, all pressed on one-sided gold vinyl. Crawling through the gloomy atmospheres of Black, Death and Funeral Doom, Half Visible Presence remains shrouded in a mysticism of its own, adorned by melancholy, morbidity and foul scourge. 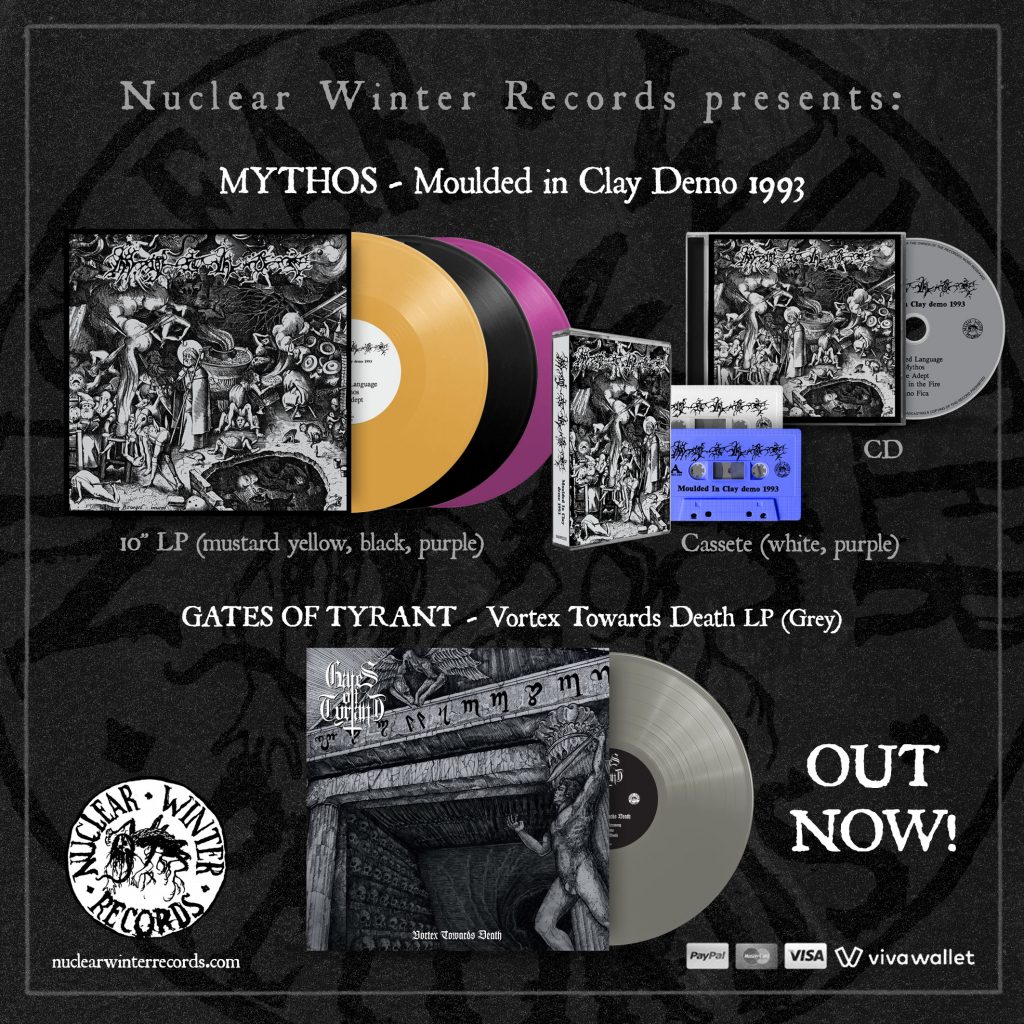 GATES OF TYRANT – ‘Vortex Towards Death’ LPCold atmospheric Black Metal from Chile.An unusual release for NWR but an album we just couldn’t ignore.LP comes on Grey vinyl, limited to 350 copies.MYTHOS – ‘Moulded In Clay’ 10″MLP / CD / TapeBarbaric Death Metal from Finland, not for the weak!!!Official re-issue of their 1993 demo. We had the honor to re-issue it on vinyl back in 2009, completely designed by the master Timo Ketola. Now we give it the full treatment and we present it to you on vinyl , CD and Tape.

Released on January 10th 2023: EMBRACE OF THORNS – ‘Atonement Ritual’ CD EMBRACE OF THORNS – ‘Praying for Absolution’ CD Official CD re-issues of these sold out albums, considered by many the band’s strongest albums – a pure ode to blasphemy and death 6-page booklet on both releases, improved layout Released on December 30th 2022: […]